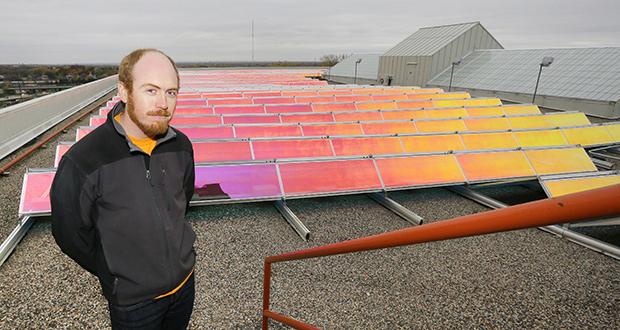 This article is by Frank Jossi  and was originally published in Finance & Commere here.

Located on the sprawling, football-field-size rooftop of the Court International Building, St. Paul’s largest solar photovoltaic array is an example of an emerging clean-energy financing trend.

The 430-kilowatt Court International array is one of four solar installations along University Avenue in St. Paul owned by Washington, D.C.-based WGL Energy Systems Inc. The arrangement is part of a third-party ownership model in solar energy that is common on the coasts and has begun to have an impact in Minnesota.

It’s not hard to understand why. Max Currie is the project manager for St. Paul-based Suntide Commercial Realty, which leases Court International and 1000 University, another building with a WGL Energy-owned installation. When he heard about the University Avenue project, he was impressed.

“I thought, ‘Hey, this is a best deal ever,’” he said. “We’re always looking to save energy or cut costs on utilities. This was a way to do that that didn’t cost us any upfront money.”

The project was the brainchild of Roseville-based IPS Solar, which found building owners and managers along University open to having their solar installations owned by an outstate company.

“In cases where building owners don’t want to pay for the system or they don’t want to manage the process and the headaches, the third-party system takes that away,” said Eric Pasi, IPS Solar’s vice president of business development. “We found that on University Avenue, building managers wanted to take a hands-off approach.”

IPS Solar used a $1.8 million grant from the Xcel Energy Renewable Development Fund to help build the project with a financial partner, Maryland-based New Energy Equity. Then the project was sold to WGL Energy.

“Increasing the finance options for solar will have a positive impact on installing more panels,” Pasi said. “This is a good archetype that will result in more kilowatts being brought online.”

Under the arrangement, a third-party owner earns money by selling the energy production to building owners for prices substantially less than local utilities charge them. They can do that because generous federal tax breaks provided to solar energy developers dramatically reduce the cost of the solar projects, Schonwald said.

IPS Solar’s founder, Ralph Jacobson, conceived of the project as an experiment to test how solar might affect the electric grid on buildings close to the Metro Transit Green Line.

As it turns out, it’s also a pilot project, in a sense, for third-party ownership on commercial buildings in the Twin Cities. Under the terms of the arrangement, representatives of the four buildings involved in the program signed 15-year contracts with WGL Energy that include “power-purchase agreements” that set predictable energy prices into the future.

Third-party ownership is one of the growing number of ways building owners can support solar energy and reduce their utility bills. One common approach is for businesses to own their own systems and take advantages of the tax breaks. This remains the preferred route for businesses that want to gain the greatest savings, said Pasi.

Another method is to subscribe to community solar gardens or Xcel Energy’s Renewable*Connect program, which allows companies to make large purchases of clean energy.

While the IPS Solar project focused on commercial buildings, the real action in third-party ownership is happening in the nonprofit sector.

Enter a growing number of finance companies, solar companies and banks that want to take advantage of the 30 percent investment tax credit and accelerated depreciation available for solar projects.

“The finance company realizes those benefits, and that gets passed along,” Kramer said. “Nonprofits can take advantage of the energy, which is sold to them at a discounted rate.”

Unlike having a solar garden subscription, solar arrays on the grounds and roofs of schools and cities offer a visual showcase of their sustainability efforts, he said. Moreover, nonprofits can usually arrange the capture of renewable energy credits, or RECs, which offer proof they are generating clean energy, Kramer said.

Subscribers to community solar receive no RECs for their participation, Kramer pointed out. Sundial Solar recommends the RECs be held by clients “because the finance company isn’t doing it for the RECs anyway,” he said.

Many local governments are interested in third-party ownership because they have no way to finance hundreds of thousands of dollars in investment, said Peter Lindstrom, Clean Energy Resource Teams’ local government outreach coordinator.

Third-party owners have begun pitching cities at the same time city councils want to boost their green credentials. Cities “are not experts on managing large-scale solar array projects,” he said. “Policymakers are saying, ‘We need to focus on sustainability. Other cities are doing it, and we should do it.’”

CERTs, a statewide nonprofit promoting clean energy, recently worked with Woodbury on a plan to attract a third-party developer for a project to be placed on the grounds of a local sports facility. Bids are due in November. What emerged is a model request for proposals that other cities can use, Lindstrom said.

Meanwhile, Schonwald is working on third-party ownership projects for Brooklyn Park, a combined project serving four cities and another focused on providing solar at a major local university, he said.

Cities like the lack of risk. “Aside from the social advantages, which people know about, they’re going to be saving money,” he said. “This is a day-one money saver. They will be saving more than they are paying. It’s day-one cash-flow positive.”

In the case of the four municipalities, the contract options being tendered by two financing companies will be better than anything offered by community solar providers, said Schonwald. For both Brooklyn Park and the multi-city collaboration, the savings from solar could cut 15 to 30 percent from their electricity bills, he said.

Farmington may have the largest solar project of any school district in Minnesota, well over three megawatts. The owner is Florida-based Kenyon Energy; the installer is Sundial Solar. Dan Miller, director of operations for the Farmington Area Schools, said the installation mixes rooftop with ground-mounted solar.

The solar arrays are being spread over several schools. Part of the appeal, he said, was the opportunity for science teachers and their classes to study solar energy. And then there was the financial package, which could save the school district $2.7 million over 25 years.

“For us it was a win-win situation; we’re not out anything,” Miller said. “It doesn’t handicap us into anything. There didn’t seem to be a good reason not to do it.”